The group of community members consist of six ladies who gather once a week to do work in the area of language revitalization.

Before pandemic started the group was teaching at the school in St. Laurent from K- Gr 12 which is English. The group spent half hour with the students once a week. Some of the activities included reading and going through Metis French words.

The partnership began through discussions with the principal.

The majority of the students in attendance are Aboriginal descent or First Nations. This gives the students the ability to hear language speaking outside of the home, if it is happening.

In the fall, the language classes will continue twice a week. 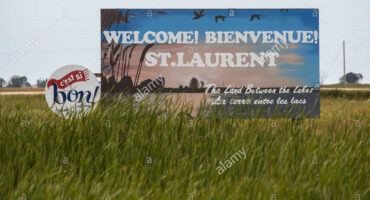 The name of St. Laurent reflects the community's Métis and Francophone roots and its cultural identity. St. Laurent is a community where you can work, play and raise your family in French, English and the traditional Michif language. It is on the shores of Lake Manitoba and has a unique cultural heritage. It became a fishing destination when Métis families arrived from Pembina to settle there in 1824.

Language is also included in the headstart program. Language within this setting included:

Within this program they teach the headstart parents how to cook real Metis foods. They do not know how to do this, buy it processed and packaged.

The group hosts cooking classes to make traditional Metis foods. Language is incorporated. The attendees do all the cooking with some guidance. The group knows the recipes by heart and make foods like bannock, pudding, etc.

In the beginning, the group wanted to do language and crafts with community. They had rented a hall and no one showed up, it was discouraging.

The language speakers do crafts with groups they work with in the language. They work with hundred percent wool. The attendees make slippers, mitts, purses. This process also include going into the bush for wolf willow. The seeds from the wolf willow are used to make rosaries, bracelets, necklaces and earrings.

The group connects to the land to pick sage and frog leaves to make medicines and ointments. They take these items and show kids in school.

Creation of a Dictionary:

A group of Metis French speakers invested their own money and volunteer time in creating a dictionary.

The idea came about from a friend who wanted to write in the Metis- French language. She was a school teacher and five women from the community of St. Laurent met and started to do this. They met every Tuesday for the past 9 years.

To write the language, it took 5 years to complete and was published in 2016 with 79 pages. The back included traditional Metis recipes. Four hundred to 500 books have been sold already and has gone to Alberta, SK, and Ontario.

A lot of words we missed so they are continuing the work and creating a second dictionary. Since this time, two of the language speakers who were involved had passed on.

The group travels all over the place when they receive invites. They attended Manitoba Hydro and talked about book, culture and language.

They have went to Nova Scotia, to Selkirk and all around town.

A couple of the members hosted classes in Selkirk and through MMF for adults.

The group has created:

The goals of the group are to:

The group was recognized by the University of Winnipeg and received a Honourary Doctorate, for the dictionary the created. They did a short video which will be released on the MMF website or U of W website.

The biggest challenge was not having funds. All the work was done on their own with no assistance.

When it was time to do books, the group went to McNally Robinson to get it printed. The cost was $1000. Two of the member invested with their own money. Now through selling books, they use it to re-invest into more resources.

There was also lack of support when they began writing the dictionary. Nobody believed in them and wondered why they were doing that. Now that it is published, people are starting to realize the importance of speaking the language.

They are pushing for 30-50 year old to teach the kids to pass on the language.

Despite the challenges, they did not care what anyone would say, they just did it and kept on going.

To help bridge the gap, more funds are needed. Support from the community would be great. They did get some space with the MMF in the Interlake region to use for crafts once a week at no cost.

They noted having someone to assist with technology would be extremely useful, especially someone to teach them. Having someone who can do proposals to get grants would help their efforts.

It is important to note that there are different dialects amongst different Metis communities and areas. In Selkirk, they are strong on the Cree.  In St. Eustache, they talk French but it is note the same.  There is English, French and Metis French. They are mixed up.